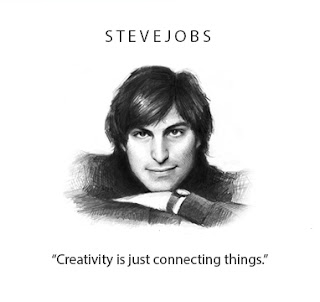 Every time I arrive at my office, I pass through many glassed-wall rooms which covered with some kinds of inspirational quotes. The company where I work is indeed a creative company, so the interior designs are made as a creative space with many captivating artsy visuals - illustrations, posters, typographies. Every room is separated by glassed-walls whereupon it is eye-catchy quotes and sayings formed in a simple, yet appealing typography. The quote which always catches my eyes said by one of the most genius persons I've ever known, Steve Jobs: "Creativity is just connecting things" displayed clearly on a blue layer clung to the glassed-wall surface, making the space called the blue room. I didn’t find it interesting in the first place up to one day I couldn’t bear it and decided to contemplate the saying. With a long warped line that connected the first word and the last word, I wondered: 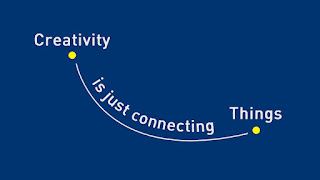 As writing is one of my daily's jobs, I know that most of the time creativity must play the big part. I write for my company, I need to mix up my ideas with particular requests and follow some given instructions. At other times, I find it difficult to blend all those things to be a ‘perfect’ writing. There’s no complain though, and I still have my position, but I feel my writing is so stiff and unnatural. Either it is just my feeling or maybe it’s because I never used to combine my original ideas with other things professionally, as a graduate of English literature and the one who loves writing, things should be much easier, right?

I've been thinking about the real meaning of the saying for weeks especially since it always reminds me of my ‘abandoned’ book as well. It’s been being scheduled to finish in March this year, my book has committed a thousand time revisions until I have no idea what was wrong again with it. I knew that day I just needed some more time to get away from it, to escape from my blocks, and found a new activity to do. Shortly, I got my first full-time job which is my job right now, it has been nearly five months, I haven’t even touched my book again. And that quote in my office, it has such power that keeps cheering me up to continue the work I have begun.

One fine afternoon, when I made my second round of black coffee in the day, I saw the quote again, this time it just felt so immersive. I did truly want to know whether it’s true or not – I ought to find the meaning. I mused on the thought while seeking for it.

Creativity links one thing to another. It connects things to create something new. You just don’t need to think much. Why I made it so difficult before? Just because creativity represents something different, and even sometimes it looks complicated, doesn’t mean it makes up from complexity. We just simply need to connect things. It may break the rules, but at the same time, it creates harmony which put together meaning and beauty.

Once I thought that in a bid to create something new, something which consists of creativity needs an extra struggle. Perhaps it’s because creativity sounds great, it looks so cool. The reality is we are only demanded to think beyond the rules, beyond the limitations. It may be hard to commit to creativity when our mind is indoctrinated by the concept that things just must be right put on their place. That kind of notions has prevented us to think out of the box.

Things Will Never Be The Same 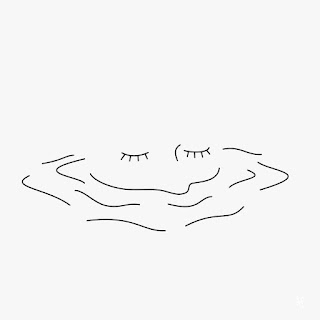 I’ve known since that day
Things will never be the same.

Things will not remain the same.

Everything now seems like a sham
As in the solemn of the night sky, we cry.
My heart is so tired, I don’t wanna pretend.
Thus hereby I rightfully convey:
By now our old story ends.

For here I cognize,
Things will never ever be the same.

Image Source: Pinterest
Posted by lista rani at 13:21 No comments:

Some of our disappointments come from unfulfilled expectation, a hope which stays as solely hope. No realization from what we have imagined in mind— what it will have become.

Painful? Yes, it is. Pretty painful.

We have enough fallen to the same hole numerous times, inflicting sadness and disappointment which shouldn't be there, if only we learned.

It could be coming from anything, but the worst disappointment comes from our unrealized expectation from someone who we love the most. Yes—putting expectation to people is a bad investment at its lowest, but sometimes we just can't either bear the feeling or control the emotion. As human, we hope people to treat us the way we treat them, we even expect them to treat us better.

I myself had never learned until I was at the point where my disappointment was on the peak. Putting expectations, giving a thousand chances, doing it for a million times - I just felt so tired and weary of all. It took years for me to implement the conception that people are truly a terrible investment for fulfilling my expectations.

It may take a long time to realize that awful fact. It may be those—who we love, that constantly breaks our heart. It may let us suffering from sadness and we always end up in the same ending, make us look like a fool who keep dreaming about something which not so sure the reality is. We are the fool who's willingly dreaming, hoping, and expecting.

Why we keep doing all those things? When we know it's hurting.
Why we always wait until we really suffering? When we literally know how it's ending.

Perhaps, unlike Mia and Sebastian, we are just a fool, a fool who always expects from something we shouldn't. A fool who can't anticipate the expectations we always create.

Then how do we escape?