An Old Story from Greek: NARCISSUS 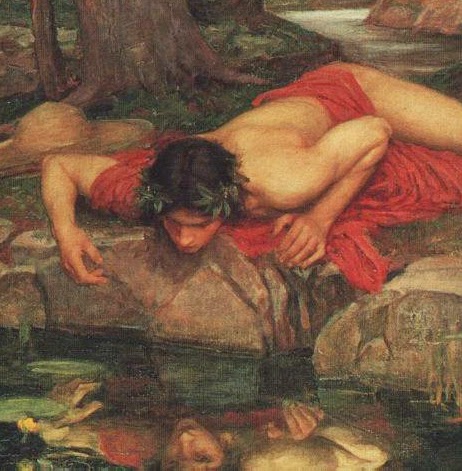 Long time ago in ancient Greece, there was a young man named Narcissus.  He was admired by many people because he was perfectly handsome. This young man was very proud of his perfection look and masculine body. So every time when he passed near water whose surface as clear as mirror, he would never miss that chance to watch his reflection. He would face down for hours while he was admiring his black and shine eyes, pointed nose, beautiful lips, oval face, and wavy hair that looked like a crown which covered his head. A sculptor seemed already downed from the skies to create a perfect human with harmonious form which coveted by everyone!

One day Narcissus passed near a steep coral. His beautiful reflection was reflected in the clear water of the cold mountain’s lake. “Narcissus, how handsome your face is! On this earth there was no greater miracle than you! Oh, how I want to kiss you!” Said the young man to himself then he bent with full of admiration. His desire to kiss his own reflection was getting stronger, therefore Narcissus stepped closer to the water, but he lost his balance weight then he fell. As he couldn’t swim, he drowned.

When the fauns knew that the most beautiful creature in this world had died, they wanted to make memory about his beauty. They turned the young man into a fragrant flower which since that day it bloomed in the mountain in spring. Until now the flower’s still exist and called Narcissus or relict flower black eye.
-THE END-


The moral of the story is don’t be narcissistic or having an excessive interest in oneself and one’s physical appearance. Narcissist phenomenon nowadays is inspired by this story.

Note : The words which marked could be derived.
Posted by lista rani at 20:39